Legend. Inventor. Godfather. These are all words that any sneaker enthusiast worth their salt would use to describe Nike designer Tinker Hatfield. But, perhaps a more apt sobriquet for the man behind shoes like the minimalistic Nike Huarache or straight-from-science-fiction Nike Mag is “architect.”

Not just because he’s actually a trained architect, but because he also figuratively architected sneakers’ most iconic lines. Air Max? Changed the trajectory of Nike and has its own branded holiday. Michael Jordan’s greatest shoes on court? The original blueprints were sketched by Hatfield and now remixed by streetwear culture’s greatest collaborators from season to season, decades later.

From inventing the cross-trainer to imagining auto-lacing sneakers before the technology even existed, the man’s resume is miles deep. “I swear designing a shoe is always a totally new experience,” Hatfield said. “I’ve never really gotten tired of designing new sneakers.”

Paradoxically, his secret to keeping the design momentum going for more than 40 years has been to periodically take a break from working on shoes, in order to give his creativity a new stimulus. That’s the moment he finds himself in now.

“I have this theory that a skilled designer could probably sit down and do a decent job in a variety of arenas,” he said, adding that he recently designed a one-of-one electric motorcycle with See See Motorcycles’ co-founder Thor Drake. Last year, he also entered the NFT space by designing digital art to profit athletes at his alma mater, the University of Oregon.

One of the new arenas that Hatfield is stepping into is beer bottles. That’s right, the world’s most celebrated sneaker designer created a limited-edition bottle with Michelob Ultra to celebrate the 75th NBA Finals. Marking the second time Hatfield’s collaborated with the company, the designer is donating his design fee to a charity based in Chicago and this year’s collectable bottle will also come with a Hatfield-designed NFT.

Here, he talks more about the project, what’s on his design bucket list, and shares his thoughts on NFTs in sneakers. 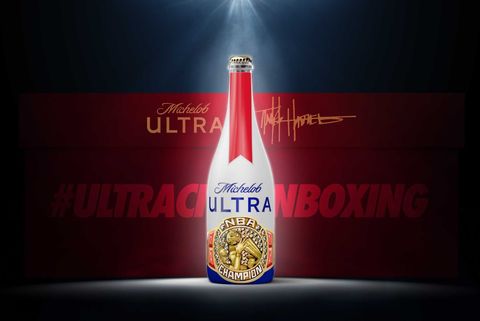 I know you’re very judicious in projects you take on, so why was this beer bottle something you wanted to do?

The whole project brings some much-needed cash to Champs in Chicago, so that’s really goal number one for me. I’m always looking for outside projects from Nike from time to time and they mostly don’t turn into anything, but Micheloeb Ultra does a great job with the NBA. Their whole strategy of “It’s all about the joy of life,” fits in with my personal approach to life, so it’s been fun, but also rewarding on the back end to get some much-needed funding to Champs.

Is it refreshing for you as a designer to not work on a shoe or something that’s used for athletic performance?

Yeah. I have this theory that a skilled designer could probably sit down and do a decent job in a variety of arenas. I actually just did a motorcycle—I worked with See See Motors here in Portland—and we did a one-of-one electric motorcycle. In between the two of us, we ended up with a motorcycle that did very well at auction and also raised a lot of money for charity. That kind of work is fun because it’s challenging when you step into someone else’s arena and it works out well.

Is there anything on your bucket list that you want to design, but haven’t gotten a chance to yet?

I was once a registered architect and I still do it today, but you just need to hire someone who has a license to stamp everything and get the T’s crossed and the I’s dotted. The reality is I do enjoy architecture and I still like to do it quite a bit. We’ve actually got a place going up in Bend fairly soon. And like most architects, I’d love to design furniture. I think I could do some fun furniture, but I’ve never gotten a chance to actually do it. So I’d love to design some furniture. 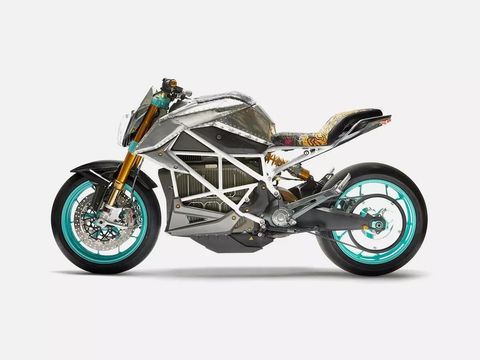 You once said you really don’t get designer’s block because you’re always engaging in new experiences. What kind of experiences are you bringing into your work now?

In my case, the past year was even slower than the last year. We all have to do a better job of matching up with the pace of life and how to move through your day. I think I became way better at it than I was before. For me, learning how to design a few extra things was a bit of a nice break from the everyday. But, having said that, I swear designing a shoe is always a totally new experience. I’ve never really gotten tired of designing new sneakers or shoes.

This collector’s bottle comes with an NFT and you’ve done some NFT work in the past year. What’s your take on how that’s changing the industry?

That’s a fair question that deserves a good-enough answer. The crypto world is still a bit foggy to me. I understand how to create an object that’s artistic in nature and I know there are different companies that can mint and authenticate and put something in motion to be sold, auctioned off, or what have you.

I do know that the work I’ve done with the University of Oregon and with some wonderful people has been a positive experience and there has been money going to athletes that deserve it, not just stars. So crypto works well for that, at least for now. So we’ll see how things shift and sift their way through the system.

Do you see NFTs adding a new layer to collectability of sneakers?

Yes. Because they authentication process is very tightly controlled. If a consumer gets one of one or something that’s one of 100, it can appreciate more in value. That’s kind of how the system is built.

Personally, I’m not trying to get caught up so much in the business side or the complexities of authentication, but I’m more caught up in trying to understand what’s appealing to people. What kind of art? What kind of stories are we going to tell? Is the story well represented in the art itself? There are a lot of things that are up in the air, but it’s really fun to explore right now.

We’re in the middle of the NBA Finals and you’ve worked with a player who was going to the Finals a lot in the ‘90s. Do you have any favorite memories of those celebrations?

I’ve tried to stay out of the way, quite frankly. Winning an NBA championship is obviously a very special thing to do, but you’re also doing It with a bunch of other people who you practice with every day or you’re coached by every day.

I may design something for the game or to be on people’s feet, but I don’t subscribe to the hanger’s-on approach. I feel like there’s an appropriate time to be a friend, and then there’s an appropriate time to be a professional, so that’s an ethos that helps me not get too caught up in all this and helps other people be at ease, especially more famous people. They don’t really want to talk to you if you’re going to be weird.

You’ve designed for some of the best players in the game for the past 30 years. Is there an up-and-coming talent out there that you’d want to do a new project with?

I have to be sort of be political in nature in my position right now. The younger athletes that we’re seeing enter into the NBA are bigger, faster, and more clever than any class before them and we have our hands full trying to design products for these athletes that are like magicians. In fact, they want to be even faster, and we want to help them do that.

There’s a lot of science to what we’re working on right now and we have a big sports research facility that helps us understand what improves performance for a basketball player or a track runner or a footballer. That’s not all very well understood by the sneaker industry because they’re always on the search for whatever’s cool, but I think what really makes sneakers cool are the stories around why they work for an athlete and that’s what also contributes to the hipness and coolness of it.

So it’s less about building around a popular personality and more trying to solve a problem that any athlete might have?

Yea I think especially around the modern athletes who are so gifted that we have to slow down and make sure we’re doing the right thing around that athlete. But, of course, it has to be retailable and do well so we get a return on our investment. But most designers—I don’t think I’m any different—most of us are too damn busy to know what the results are because we’re too damn busy or we’re on to the next problem to solve.