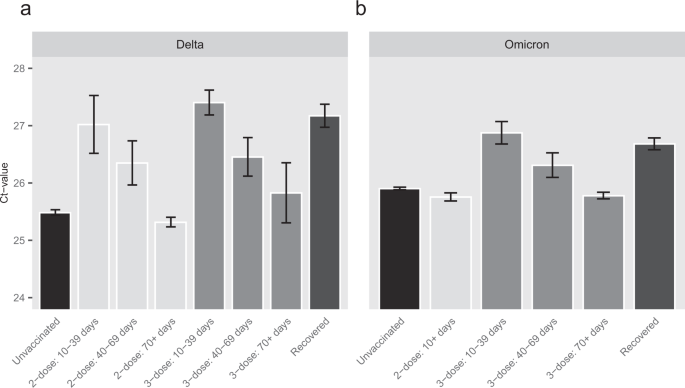 The study was approved by an Institutional Review Board (IRB) of the Sheba Medical Center. Helsinki approval number: SMC-8228-21. Individuals included at this study were tested charge-free as part of the Israeli testing and surveillance program. Patient consent was waived, as this is a retrospective analysis using data which was collected as part of the national testing and surveillance program. The investigators did not have access to de-anonymized information.

We used a nationwide database of Ct values from positive cases. Samples were collected between June 15, 2021 and Jan 29, 2022. SAS and Python were used to retrieve the data, and R (version 4.0.3) and R Studio (version 1.4.1103) were used for analysis. The dataset contained over four million records of positive PCR tests with Ct-values. Records contained Ct measurements for the genes N, E, Orf1ab or S genes. Results are presented for N and E, and four different laboratories, two of which are major Israeli Health Maintenance Organization labs, together representing ~40% of the Israeli population, and the other two are labs commissioned to perform tests for the Israeli MoH. Ct values < 10 or >40 units were removed from the dataset, since such values are likely the result of reading errors. A negligible number of such samples were identified and removed from the four labs, N & E final dataset (9 records).

PCR and Ct values from over 460,000 were initially collected. Using encrypted identity numbers, we merged Ct data with demographic information and vaccination data, to determine the patient’s age, sex, and vaccination status. The merged data contained both Ct date and PCR sampling date. For the Ct measurements included in this study, the number of days between these two dates was at most a single day. Since PCR date is the actual sampling date, these dates were used for analyses. Overall, our analyses, performed on samples from four labs, and for the vaccination statuses detailed below, contained 327,659 individuals, 315,111 Ct measurements for the gene N, and 228,125 measurements for the gene E.

Vaccination statuses were determined for each patient and infection event, based on the PCR lab date. Individuals who had the infection between the first and the second dose were excluded from the analysis.

The following definitions were used to group individuals (Figs. 1 and 2):

Unvaccinated: Up to the first dose.

Recovered: Individuals who had a previous infection event with a positive PCR test at least 90 days prior to the current infection, and who have not received a vaccination dose between the two events.

We divided the follow-up study into two separate periods, each dominated by a different variant:

These periods are also in accordance with the first documented case of Omicron infection in Israel (see Supplementary Fig. 1).

To account for temporal effects in our regression analyses, we partitioned the Delta and Omicron time periods into 7-day time intervals (bins), using PCR dates to classify Ct measurements. Age groups were defined as 0–11, 12–15, 16–39, 40–59, and 60 or older. Due to national policy, individuals of age 0–11 were not vaccinated until relatively late, and were thus excluded from the main analysis. Nonetheless, ages 5–11 were included in parts of the sensitivity analysis presented in Supplementary Note 1 (see Supplementary Table 5).

For the analysis of waning in the ‘Recovered’ (Fig. 3), we partitioned the time elapsed between the first and second infections into 60-days intervals (2 months). Intervals for which the number of samples was <50 were merged with the adjacent interval.

The main tools in assessing the effect of different factors on Ct-values are the linear and quantile regressions. On examination of the different cohorts, we used cohort, age category, sex, and categorized calendar date as explanatory variables. Daily Ct values may have been sampled from infectees at different stages of the infection (i.e., time from infection). We thus also examined the median and a lower quartile of Ct values, controlling for age-of-infection variability (see Supplementary Tables 2 and 3). To compute error bars in Figs. 1–3, as well as Supplementary Figs. 2–4, we used the estimated cohort coefficients, while setting all other coefficients to their mean values (as in predictor effect plots22). We then calculated the (0.025,0.975)-percentiles to obtain confidence intervals through the multivariate normal distribution.

Further information on research design is available in the Nature Research Reporting Summary linked to this article.