If you watched the wild ride that unfolded on The Rehearsal, you may have a question or two. Or five. The HBO series sees The Rehearsal‘s creator, comedian Nathan Fielder, put willing (!) participants through an elaborate practice run for a particularly stressful moment in their lives. Some have denounced The Rehearsal as a cruel, manipulative exercise in Fielder’s narcissism. Others have praised the show for being one of the most moving, complex, and strange efforts on TV. Some just find it downright funny.

Of course, The Rehearsal, which debuted its season finale last week, offers very little answers for the viewer. Is everyone on the show an actor? Did Robbin Stone really crash his Scion tC at 100 mph? And is eating poo really satanic?! As Angela has speculated on the show, Google may be controlled by the devil, so where do we turn to when grappling with uncertainties? For people like Fielder who overthink every social interaction, The Rehearsal resembles what occurs in the safety of a therapist’s office. You might even be familiar with it. The Rehearsal‘s habit of running through a stressful situation step by step is a technique used in cognitive behavioral therapy (CBT).

In therapy, people are urged to think through every possible outcome of any given anxiety. The Rehearsal has a more… direct approach to dealing with life’s uncertainties, scripting out every word a person might say, as to eliminate any unpredictable outcome. Even though Fielder seemingly has absolute control as The Rehearsal‘s director, it’s where his grasp slips when things get interesting. Watching Fielder navigate his web of lies and simulations often feels like watching a man in therapy—exposing vulnerabilities, confronting interpersonal conflicts, and uncovering truths.

We talked to Jasmine Dayan, a licensed clinical psychologist and cognitive behavioral therapist from Madison Park Psychological Services, about how The Rehearsal resembles actual therapy. You know, the kind that doesn’t involve the construction of highly-expensive New York City bars.

This conversation has been edited for clarity.

What did you think of The Rehearsal?

It was an interesting social experiment. Fielder was trying to help alleviate anxiety through the practice of rehearsing. He was able to help the participants reduce their anxiety by going through every scenario possible. That’s very similar to role-playing or exposure therapy. That’s a technique used in CBT where different life scenarios are played out for patients to face their fears and overcome anxiety. It’s basically exposure therapy.

When you practice exposure therapy with your clients, what is it like compared to the show?

It’s very similar in that you try to recreate what might happen and go through different scenarios of how the person on the other end will react to your delivery. This practice decreases anxiety and helps the patient—or in this case, the participant—realize they are in control of their emotions. The catastrophic situation that they perceived is not catastrophic. It’s manageable. Going through those scenarios and practicing them over and over again is a big part of role-playing in CBT. 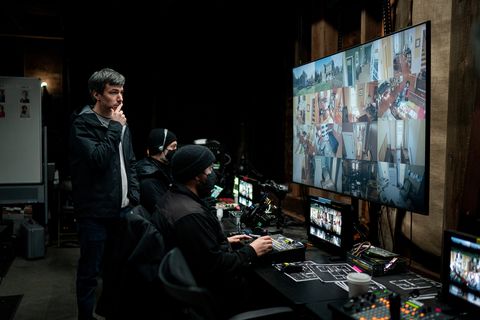 Don’t make us talk about The Rehearsal’s finale. Please.

Can we ever rehearse for how we’ll feel in a situation?

There will always be that element of uncertainty. You can prepare, plan, and predict as much as possible. That’s what Fielder tries to do. He really went above and beyond to perfect the role-playing [element of CBT], but ultimately there is always uncertainty that comes along with real life situations.

At the end of Episode One, Fielder rehearses how he’ll confess that he helped his participant to cheat at trivia. What advice do you give people for having difficult conversations?

What’s important in CBT is to talk through the irrational thoughts that someone might have in relation to that difficult conversation—which is what creates the anxiety. Some people have thoughts that someone might hate them if they reveal that they lied. So, going through those catastrophic thoughts through role-play and discussing those thoughts, patients are able to realize the perceived catastrophe isn’t necessarily going to happen or it’s not as bad as they think it will be.

At one point in the show, Fielder teaches an acting class—then hires actors to play his students and someone to play him, so that he can experience what it’s like to be taught by himself. How can people manage anxiety about how others feel about them?

Fielder really goes to great lengths to understand how other people feel about him. This is really important in terms of CBT, because you want to be aware of how you feel and how other people feel. But be aware what you perceive other people are feeling is only a perception—it might not be reality. He figured this out with one of the participants, Thomas, but he really couldn’t put himself in Thomas’s shoes.

Even though he moved into his apartment?!

He goes to extremes to put himself in other people’s shoes. But you can see that’s flawed, because he can never feel the same feelings as the other person. Even with so many attempts to manipulate the situation.

That’s a fear of judgment from others. People are afraid of what other people think about them. That’s all perception. We don’t truly know how someone feels about us. We can only perceive or speculate. People with anxiety should challenge some of those thoughts and remind themselves that we are putting that perceived judgment on someone else. We give what people think about us weight. When we give weight to something, that’s what makes it matter.

Would you ever recommend your clients participate in The Rehearsal?

Yes, absolutely. I think it’s a good depiction of how role-play works in therapy. If that’s something the patient wants to do, it would be helpful. They would be able to gain a lot by being able to role-play everything out so well.

I thought it was so interesting. There aren’t that many shows out there that portray what happens in exposure therapy. Being able to see that on TV is helpful for other people. Maybe that will encourage them to come to therapy.