Season One of Reservation Dogs exploded onto the American television scene with a story that was unlike anything before it. An Indigenous producing team of Taika Waititi and Sterlin Harjo, armed with a talented collective of Indigenous writers, directors, and actors, created eight episodes of brilliant and original storytelling. The show garnered many awards in its first season: two Independent Spirit Awards, an AFI award, and a Peabody Award, just to name a few. Along the way, it managed to make fans out of prestigious filmmakers like Barry Jenkins and Guillermo del Toro.

Now Season Two is here and the gang is back, but they’re all moving in different directions. Season Two picks up right after the tornado hits the rez at the end of Season One apparently twisting everyone in new directions. Elora Danan has decided to head to California with her arch enemy Jackie, the leader of the NDN mafia. Bear, for his part, is lost; not only is he having “daddy issues,” as Willie Jack points out, but he also feels deserted by his best friend Elora. Willie Jack is all but certain that the bad luck funk infecting her friends is the result of a curse she placed on Jackie; now, she’s on a mission to reverse the curse. Happy-go-lucky Cheese is perhaps the only consistent thread from last season to this one, content with finding simple moments of pleasure at the bottom of a Sonic drink.

The beauty of the Reservation Dogs universe lies within its simple approach to Indigenous culture and storytelling. The show is not overly precious with its characters and their predicaments, the way a non-Indigenous writer or director might be. There is no underlying need for white redemption for the all ills America has dealt to Indigenous people, nor any poverty porn, either. These Indigenous creators are simply telling stories about the world they’re from. The Indigenous characters in Reservation Dogs are human and flawed; they steal hot chip trucks, they steal pick-up trucks, they just plain steal. They don’t have all the answers, either. The characters may not know all of the traditional aspects of their Indigenous culture on demand (at least in the way your average American might assume they would). They are young and still learning—some are older and still learning. To reference a popular and frankly trite phrase, they don’t “walk in two worlds”; rather, they bring their Indigeneity into this world in all its complexity, and it may not look the way Hollywood told you it would. They do all of this unapologetically.

These Indigenous creators are simply telling stories about the world they’re from.

The first of the four episodes made available to critics in Season Two begins with Willie Jack addressing the fifth and deceased Reservation Dog, Daniel, via his picture on the kitchen wall, catching us up on what’s happened to everybody while we were away. Everything’s all “fucked up,” as Willie Jack would say. Each of the main and ancillary characters are touched upon, but the main story concerns Elora and Jackie, who are on the run to California (or running away, depending on your perspective). They’re terrible at it. One need only look at the car they’re using to head west, a beat-up rez rocket belonging to Elora’s grandmother, to know that they will not get far. Meanwhile, Uncle Brownie (Gary Farmer), after scaring away the tornado at the end of Season One, is now convinced that he’s a holy man on a sacred journey under the “guidance” of William Knifeman, or “Spirit.” Spirit’s guidance may or may not be the best; he dishes on obscure Crazy Horse knowledge while noshing on Uncle Brownie’s Sonic tater tots. Spirit’s Crazy Horse anecdotes mostly sound made up, but Uncle Brownie takes in this “wisdom” because it’s all he’s got. Knowing the messenger, he also knows to take it with a grain of salt. Skeptical and laughing, Uncle Brownie tells Spirit, “You’re one of those backwards spirits.” Bear deals with Willie Jack’s obsession with reversing the curse on Jackie, but he has his own demons to address. Meanwhile, Elora and Jackie take their Indian car adventure about as far as can be expected, which isn’t far. The jury’s out on whether they are good for each other. 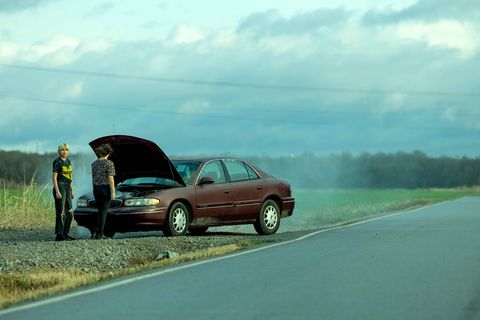 Jackie and Elora don’t get far in their beat-up rez rocket.

The second episode finds Elora and Jackie still literally on the run, taking refuge in a grassy field near the large home of a lonely divorcée (Megan Mullally). Mullally rides up on a Polaris Ranger Diesel four-wheeler (presumably because walking is out of the question on such a big Oklahoma property) to offer them a warm home and a hot meal. Freshly showered and adorned in Oklahoma State University gear, the girls regroup to determine their next move. Meanwhile, Uncle Brownie and Bucky (Wes Studi) have teamed up to help Willie Jack, Bear, and Cheese rid themselves of the bad medicine from Willie Jack’s curse on Jackie. It’s pretty amazing to see Gary Farmer and Wes Studi in the same scene. These two Indigenous veteran actors play off each other very well in a hilarious prayer to fend off the curse. The idea is to help the Reservation Dogs, but in actuality, Uncle Brownie and Bucky have old beef that needs to be indirectly addressed. The result is an Indigenous prayer showdown for the ages. In his search for meaning, Bear finally comes to the realization that he simply needs a job—right after he’s confronted by the very people he’s stolen from before. With a surprisingly astute assist from Spirit, he mans up to face his past mistakes and makes it a point to address his future.

Bear finds this future on top of a house, taking part in that old Oklahoma rural employment pastime: roofing. Appropriately titled “Roofing,” Episode Three brings a new director into the Reservation Dogs lineup: Erica Tremblay, who deftly handles a very male-centric episode about Bear trying to learn how to be a man without a father. His mother, Rita, catches him trying to beat up his new tool belt before leaving for his new roofing job, “I just bought that for you! It’s brand new! It’s a nice one!” She doesn’t understand Bear’s journey; he’s trying to be a man without his father’s guidance, and he doesn’t want to be taken advantage of or mocked at his new job. Much like the belt, he needs to show a rough exterior. He inevitably gets hazed anyway because that’s just what happens, but learns new lessons in the process. Perhaps no one really has all the answers. A lot of the dialogue occurs on top of a roof in this episode, and visually, it’s a strong aesthetic choice. It lends an otherworldly element to the episode; a roof is where people can truly speak freely. 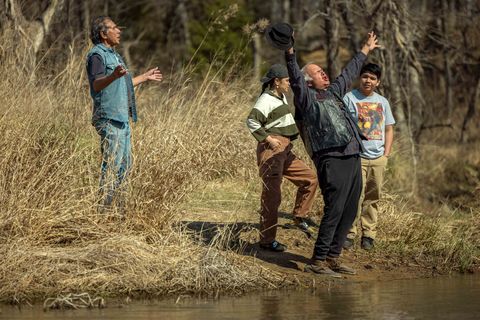 In the fourth and strongest episode, “Mabel,” an elder lies on her deathbed and reunites the core Reservation Dogs. When Elora’s grandma is ill, it brings the community together much like the tornado episode did in Season One. It’s a serious episode laden with awkward moments that force characters to face the past and evaluate what the future may bring. Family and community alike come together at Mabel’s house, where they make frybread and sofke, a traditional Muscogee dish. Coffee is poured and chairs are brought out to welcome visitors. It’s that melancholic mixture of people who are happy to see each other under unfortunate circumstances. Spotted among the cast in the house are staff writer and producer Migizi Pensoneau, as well as former Sundance Indigenous program director Bird Runningwater.

The ability to successfully navigate a variety of tones is the show’s secret sauce.

Bear and Cheese arrive and immediately hug Elora. In his haste, Cheese tells Elora, “Sorry sister, she’s in a better place,” to which Elora replies, “She’s not dead yet, Cheese.” Uncle Brownie arrives with a “traditional” four pack of Sonic Sodas. Tribal Cop/ Lighthorseman Big is a welcome sight; he brings a large vegetable and his always-hungry appetite for love. He spots Rita’s spitfire cousin who’s been away from home for awhile; never one to pass up an opportunity, he quickly goes into flirtation mode. Jackie, who has tainted the Reservation Dog alliance, arrives with her aunt, much to the chagrin of Bear and Willie Jack. During the community meal, Elora calls for a prayer from Cheese. Cheese, mid-bite and always one to rise to the occasion, but not really sure of the correct prayer to give for such an occasion, improvises a prayer on the spot with what he sincerely does know: “We know our friend here Elora is having a hard time right now as her grandma transcends into that place in the great beyond, in a galaxy, far… far… away…” At the end of the episode, there’s a very powerful scene with a surprising twist of humor—humor that only an Indigenous creative team could bring. I won’t dare ruin it. I’ll just say that it’s a perfect example of Indigenous humor, and the special ability of the Reservation Dogs creative team to channel it. The ability to successfully navigate a variety of tones, often in the same scene, is the show’s secret sauce.

The first season of Reservation Dogs (along with Rutherford Falls and now Dark Winds) marked a breakthrough for Indigenous representation in American television. I wondered if the second season could continue the high level of excellence that the first season created and sustained. The first four episodes certainly continue to build and explore toward something even more interesting, which is not easy to do. I’ve heard this season is even longer than the last by at least 2 episodes. In the trailer, I caught a glimpse of what looks like a 49 song scene (a post powwow celebration) that I personally really look forward to later this season. Will this show continue to garner more awards and will the public stay engaged in this breakthrough series after the first season high? Can Harjo and company scale even greater heights in this special Muscogee Reservation Universe (the MRU)? From what I’ve seen, yes, yes they can. One need look no further than what Guillermo del Toro said in his recent tweet, after the perceived Reservation Dogs Emmy snub this year: “Nominated or not, RESERVATION DOGS is one of the best things on the tube. Look for it, please!!” I concur.

Jason Asenap is a Comanche and Muscogee Creek writer and director based in Albuquerque, New Mexico.