When I feel like shit, I don’t go for a run, order family-sized servings for one on Grubhub, or press play on one of those stupid meditation apps. No. I pour a glass of whiskey and grab a LEGO set. I tinker with each piece, one on top of the other, until my brain goes somewhere else. I’ve been thinking about what compels me, more and more lately, to pour out those little bricks—red and green and blue and yellow—and do that thing we all used to do, without hardly a second thought: play.

My family taught me how to play. Maybe yours did too. I grew up with my own Luigi, right out of the gate: a twin brother. When Luigi and I were little, my dad bought us the OG LEGO Star Wars to mess around with during a long drive. Neither of us really looked back after that. We’d recruit my mom to build sets with us at home. More pieces, more fun. There was the Galaxy Explorer, then the Knight’s Castle, always bigger than the last time. My mother is an actress, so she got us in the habit of making the little LEGO people perform, a sketch show from the living room rug. We hit double digits, Luigi and I, and our parents divorced, remarried—then quite a few little siblings entered the picture, split between two houses. Now I’m the director of the LEGO sketch show, learning how to play all over again through my 10-year-old brother. 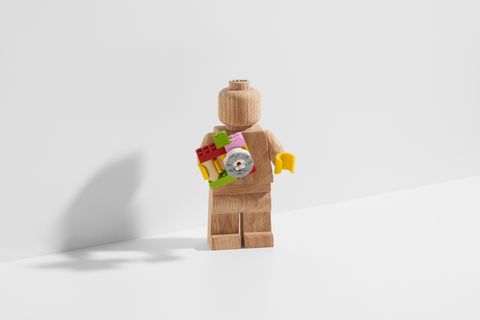 ’”When you’re playing, like really playing, you create an isolated space. Money, politics, and wounds, old and new, can’t live there.”’

This is all to say? Play runs in my family. Hell, my grandparents still sign cards with doodles of themselves. My family, the whole lot of us, plays board games and builds puzzles. Sometimes, we’ll break out some booze and hold an overly competitive Switch Sports gauntlet. It makes us close. Because when you’re playing, like really playing, you create an isolated space. Money, politics, and wounds, old and new, can’t live there. Sure, my family may still fight when we play, but only when I kick everyone’s ass in Monopoly.

I want to tell you why I play with myself. Don’t be a perv, OK? It’s really only something that LEGO lets me do. When I’m constructing, say, a LEGOified Van Gogh in front of a canvas and easel, painting The Starry Night (you’ve just gotta look at it!), my brain is off. I’m doing something physical, forgetting about the bullfuck going on in the world. That might be obvious. Playing alone, though, without a soul nearby, gifts you something else: discovery. It sounds like I’m a walking ad for an alternative learning school, but these are crucial things for adults! When’s the last time you discovered something? Discovering something about the way you think, or the way you relax—something about art or culture, your relationships or your career. For me, that happens when I’m tinkering with the engine of a LEGO Ferrari. When we play, we discover. We think differently. When we allow ourselves unadulterated freedom, no expectations, our resilience becomes clear. We’re all sentient, for god’s sake. It’s easy to forget that, given that our country is a toxic waste dump. Simply playing with LEGO, doodling, tossing a ball, or booting up the Nintendo can let your mind wander in ways it never could.

I’m absolutely treating this story as a letter to my bosses, explaining why thousands of dollars of LEGO will be expensed.

So yeah, I like to drop money on plastic. And spend time sitting on my floor, you know, building. You’re probably wondering how it’s actually improving my life. Well, I’d love to say something profound about how Hustle Culture has given me an untreatable itch to work even when I play, but that’s not entirely the case. I’m a designer, which LEGO doesn’t totally help with. (Maybe if I was an architect it would, but I’m not that cool.) But when I’m feeling stumped, blocked, or artistically hopeless, I find these plastic bricks wake my mind back up. Looking at their colors. Shapes. The little squiggles on LEGO Darth Maul’s face. It gets my creative juices flowing, even if I don’t fully understand how. I always work a tiny bit better the morning after a building sesh. By the way, I’m absolutely treating this story as a letter to my bosses, explaining why thousands of dollars of LEGO will be expensed.

Allow me one small note of sincerity. Bring out a tissue. Or two. Things have gotten dark. Depressing. I know, for me, there have been far more days over the last few years when I’ve felt like anything but myself. I’ve been frustrated, angry, low-energy, burnt out, and just plain stuck. A lot of us have a flaky relationship with who we were three years ago, before everything. We’re still under a boulder of anxiety, which I’m sure I don’t need to tell you. Play isn’t a cure or a replacement for therapy, of course, but it’s a fantastic exercise if you want to reconnect with others—and yourself. So, I know fluffy words like discovery and invention probably make you want to spit at me. I get it! I do it every morning to myself in the mirror. But I appreciate you bearing with me.

So sure, this is probably a diary entry, more than anything else. But I urge you to give yourself some play time. Whether it’s going to pick up a LEGO set, or blowing on a cartridge just so you can jump back into a game you loved as a child, doodling… whatever it is. You deserve it. I’m not a doctor, but you bet I’m prescribing it. We’ve been through heartbreak after headache, and can’t bear to lose anything that makes our capacity to feel things a little bit bigger. It’s a wide, problematic world—one that little plastic bricks can’t fix—but never underestimate the power of building.

Cameron Sherrill is a designer and writer for Esquire.com, where he covers technology and video games.