All that context and then some ran as subtext when I saw a picture from Kanye West’s YZY Season 9 show during Paris Fashion Week. A flick where he and Candace “I-Cape-for-the-far-right-and-call-it-conservatism” Owens hold hands and cheese while dressed in t-shirts emblazoned with white lives matter.

Be clear: white lives matter, like Blue Lives Matter, is a motto meant to negate the importance of the Black Lives Matter movement, to imperil the humanity of Black people writ large. There ain’t no gainsaying the truth that white lives matter fomented the tiki-torch racists in Charlottesville and the insurgents storming the halls of the Capitol Building, or that it inspired Dylan Roof, even Kyle Rittenhouse. The phrase is so damn incendiary that the Anti-Defamation League deemed it hate speech. (The Klux Klux Klan began using it in 2015 at as a response to BLM.)

Some of Ye’s esteemed guests took offense to the hateful tees and bounced early from the show—among them Jaden Smith, who tweeted, “Black Lives Matter” and “True Leaders Lead…I Don’t Care Who’s It Is If I Don’t Feel The Message I’m Out,” and the Vogue journalist Gabriella Karefa-Johnson, who shared a critique of the show via her Instagram stories.

Ye, in textbook misogynoir, directed the brunt of his ire at the Black woman, posting her pic and trying to shame her intellect and fashion. As a matter of fact, his ad hominems were so flagrant that Vogue issued a statement condemning them.

In the text exchange that Karefa-Johnson shared, she admitted to “fuming” at first, but went on to argue that Ye was attempting to affect a Duchampian, readymade critique (the value/meaning of art is intrinsic to the context, signature of the artist) of art. She explained that he’d tried to do the same thing by wearing a MAGA hat. “He neglected to realize the importance of the object when he tried to extend that kind of subversion to the BLM slogan. One is object one is ethos,” she wrote.

Karefa-Johnson’s reading of Ye’s intent was a generous one. The hot takes since have been divided into two predictable camps: those who’ve written off Ye as a neo-coon whose actions are at best offensive and at worst a threat to the safety of Black people, and those who dismiss Ye’s malefactions as effective but benign marketing and publicity stunts.

Before that, though, a confession of sorts: Last year this time, I’d sworn off supporting Ye. Had refused to buy his music or his clothes, had gone so far as to dismiss conversations about him with “I don’t fool with dude.” But he put out Donda and I was curious. Then my brother bought my son some Yeezy slides for Christmas, and in sneak-wearing them, I discovered their immense comfort. Then I purchased my own—two pair no less, and a pair of Yeezy Foam Runners. To keep it a buck, as recent as last week I added a sweatshirt from Ye’s Jesus is King (the Black Jesus was what almost sold me) tour merch to the Wishlist of a favorite shopping site.

Were he a white man, I’d call him a white supremacist. Or at the very least a racist.

A part of me has wanted to divine the man’s motives, has held fast to the belief compelled by a man capable of giving us “Jesus Walks,” “Diamonds Are Forever,” and “The Glory.” A part of me needed to disbelieve in Ye’s blatant de-evolution. The fact that his latest harm came at a time when I’d revived my support of his music and fashion amplifies the disappoint I feel in myself. Matter of fact, in this moment, I feel every bit of Boo-Boo the Fool.

All this to say, I commiserate with those who’ve been ambivalent about Ye.

Kanye, the old Kanye, seemed to love us.

But what does that love matter when the man’s actions align with those who hate us, with people who, if you subscribe MLK’s logic, are hell bent on seeing us extinct?

Were he a white man, I’d call him a white supremacist. Or at the very least a racist.

While I won’t go so far as to call dude a white supremacist, I am calling the former Kanye Omari West a proxy racist.

Ye is a racist by proxy.

Touché, there is ample scholarship supporting the notion that Black people are incapable of being racist. That claim is grounded in the idea of structural racism, on the assertion that Black people can be prejudiced but don’t have the power to oppress white people at large. That view is often proposed as a means of challenging the idea of reverse racism against whites.

For the all-time record, I concur that there’s no such thing as reverse racism. You heard it here, too: My people don’t hold enough collective power to systemic anything away from or onto white folks.

However, proclaiming Ye a proxy racist ain’t about his ability to oppress white folks. It’s about him serving as a willful tool of white people’s oppression of us. And doing it again and again with knowing and intent.

And let no one submit the alibi that he’s just doing what a capitalist does to make money. As if brilliant minds as far back as W.E.B. Dubois haven’t proven that capitalism is inseparable from racism. (Historian Walter Johnson terms it “racial capitalism.”) And let no one proffer the buffer of Ye’s commercialized Christianity. As if there weren’t churches above the dungeons used to hold captive the Africans they door-of-no-returned into enslavement. As if those Southern enslavers didn’t tout the Good Book. As if those westward Christian expansionists didn’t deem their Manifest Destiny/native pogrom “ordained by God.” 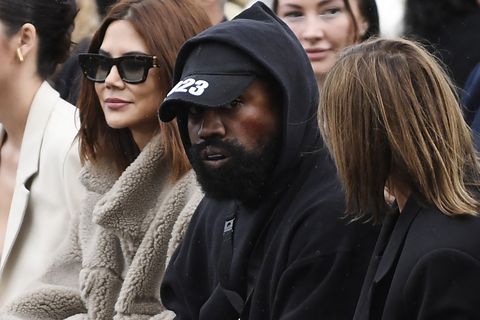 Ye at the Givenchy fashion show in Paris on October 2.

Yet for all his railing against reading books, one thing he knows is visual language. For all his erratic behavior, he never ceases to remind us nor prove his immense influence on the masses. Yet for all the apparent chaos, there seems a whole lot of forethought happening.

For instance, the intent of linking hands with Candace Owens for a photo opp, someone who was at his show for the potency of her antagonism to Black people. The intention of choosing Selah Marley, daughter of Rohan Marley and Lauryn Hill, to be not only one of the few models who wore the wlm t-shirt in his show, but the one who flaunted it with him in BTS footage. Recruiting the granddaughter of the great Bob Marley—a man famous for using his music to rail against racism and hate—as a co-conspirator is a particular affront to the whole damn Black diaspora.

Ain’t nothing about that happenstance.

The back of Ye’s infamous tee has received the lion’s share of the coverage. However it’s noteworthy, too, that the front of the tee was printed with a photo of Pope John Paul II and the words “Seguiremos tu ejemplo” (“We will follow your example”).

What message are you sending them about what should and could be done to us?

Your people, the ones you’ve professed to love.

Who’ve rode with you through all the trials.

Who’ve made your hits, the hits.

Who’ve made your cool, the cool.

Mitchell S Jackson is a contributing writer for Esquire. He is the winner of a Pulitzer Prize and a National Magazine Award as well as the acclaimed author of the memoir Survival Math, and the award-winning novel The Residue Years.